DEATH OF THE PERSIAN PRINCE: Review by Polly Guerin 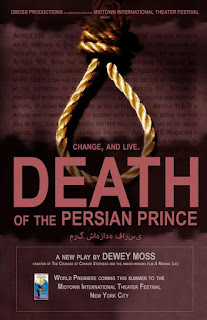 The story that inspired the play DEATH OF THE PERSIAN PRINCE is a riveting revelation about sexual reassignment surgery which is legal in Iran. However, homosexuality is forbidden in most cases for males, punishable by death. Yet, hundreds of gay Iranian men choose to change their gender through sexual reassignment surgery.. If they don't, it's legal to execute them.
A world premier production in the 16th Annual Midtown International Theater Festival, Death of The Persian Prince is written and directed by Dewey Moss and most of his works involve LGBT elements. In the program notes he comments, "We've come far in the U.S. in regards to people's rights--which is celebrated---but my work on Death of the Persian Prince reminds me that as a world society we have so much further to go. It is my hope that this play will serve to educate, open minds, and continue the idea of a better society for all.
A limited engagement at the Davenport Theater's Black Box Theater, located at 354 West 45th street,  will be presented Saturday July 25th at 5:30 pm and Sunday July 26th at 1pm. (Tickets $20 through the following link: http:www.midtownfestival.org). Then the play moves onto to the South Asian International Performing Arts Festival August 4th at 9pm and August 8th at 4pm at Access Theater Black Box, 380 Broadway, New York (Tickets at SAIPA.org) 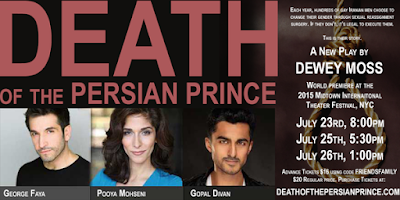 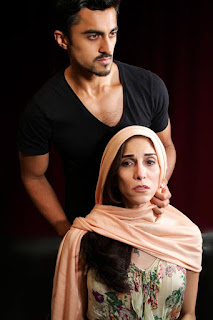 The cast of three sterling actors have a synergy that keeps us riveted to our seats. In a present day, evening setting Samantha, played by the attractively engaging Iranian-American actress Pooya Mohseni---she interacts with James portrayed by George Faya, a not-so-docile, veteran of the Iraq war. The scene opens with a highly charged romantic encounter in Samantha's New York apartment, when late in the night James temporarily leaves, suddenly there is a knock at the door and the drama runs into high gear. Enters a stranger, played by the fiercely driven Gopal Divan, who has arrived unexpectedly from her homeland. Shattering confessions and unimaginable terror, the story of James, Samantha and the stranger takes an unexpected turning, leading to a stunning ending.
The Death of The Persian Prince dramatizes the real-life story of thousands of gay Iranian who have changed genders to avoid execution by the Iranian government. It is a haunting tale about the power of the human spirit. The play runs 55 minutes and is presented without intermission
Ta ta Darlings: I highly recommend Death of The Persian Prince not only for its entertainment value but for the story that it reveals and informs us about  how "being cured" is not the solution but ultimately leads more often than not to suicide.  Fan mail welcome: pollytalknyc@gmail.com..