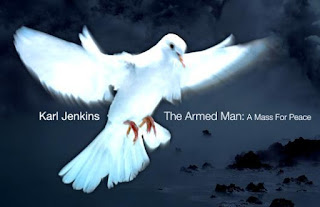 The pomp and circumstance of events paying tribute to Pope Francis’ visit to New York brings “The Armed Man: A Mass for Peace” by Karl Jenkins as a timely opportunity to celebrate not only the humble Pope but also to celebrate a Mass for Peace.  “It is an inter-religious and cultural melting pot, and there is no better way to celebrate Pope Francis’ visit to our great city,” said Richard Owen, music director of Camerata New York.
Camerata New York, under the baton of Maestro Owen, and the Amor Arts chorus will perform the rarely heard evocative work in New York, on Thursday, September 24 at 8 pm at a FREE concert, open to the public, at St. Jean Baptiste Church (Lexington Avenue at 76th Street). Reservations are requested. For more information, call 212.874-3990.
“It is  a tremendous privilege for Camerata New York, in collaboration with the Amor Artis Chorus, to be performing this seldom heard work,” said Owen. The Armed Man: A Mass for Peace is a multi dimensional performance, based on the famous 15th century French folksong, “L’homme arme, a multi-religious work. The performance, accompanied by a video slide-show, is composed of traditional mass movements and Old-Testament Psalm settings, a Muslim call to prayer, and poetry by noted 19th century poets. In a world of turmoil and grief the work affirms that change is possible, and proposes that in the new millennium, in the words of Tennyson, we “Ring out the thousand wars of old, Ring in the thousand years of peace.”
This epic event is a powerful reminder Owen said. “It is a tremendous privilege for Camerata New York, in collaboration with the Amor Artis Chorus. “What makes the piece so special is that it is inspired by the Mass, the Islamic call to prayer, and the Mahabharata, as well as Rudyard Kipling, Alfred Lord Tennyson, and Sankichi Toge, who survived the Hiroshima bombing.”
What is Camerata New York? Now celebrating fourteen successful seasons in New York, the orchestra is made up of the finest young musicians in this great city. The orchestra has performed in major concert venues and hailed by critics for its “lustrous tone-quality with collaborations with some of the finest artists of the day including Alvin Ailey, cellist Nathaniel Rosen, soprano Aprile Millo and film star Alec Baldwin. For more information visit www.cameratany.org.
It would be remiss not to mention something about conductor Richard Owen. His celebrity is prolific and in addition to being the music director of Camerata New York Orchesta he is principal conductor with the Adelphi Orchestra and music director Saints John and Paul church in Larchmont, New York.
Just to give equal billing to Amor Artis let it be said that for more than fifty years, it is one of New York’s beloved institutions. Its chorus and orchestra gained renowned as a pioneer of the early music revival in the U.S. Under its founder, Johannes Somary, it issued the first recordings ever of Handel’s oratorios, Theodora and Jephtha, and after 9/11, Amor Artis was there, making music with renowned musicians from around the world. For more information visit www.amoratis.org.
Fan mail is always welcome at pollytalknyc@gmail.com. Visit Polly’s Blogs at www.pollytalk.com.