Black Fashion Matters. That is the thesis of the Museum at FIT'S exhibit Black Fashion Designers. which examines the impact made by designers of African American descent on the world of fashion.
While acknowledging the creative talents of designers, who were often overlooked, the exhibit pays homage to their legacy and puts a fresh spin on issues of diversity within the fashion industry.
Co-curated by Ariele Elia, an assistant manager of outfits and fabrics at the Museum at FIT and her co-curator Elizabeth Method, a curatorial assistant, the exhibit, featuring 75 ensembles by 60 designers, shows that even though they share a common identity, black designers are cut from an individualistic cloth of originality.  While the 1970s was a good time for black designers, the sinuously sexy clothes by Stephen Burrows and Scott Barrie were regarded precisely since they were black. Although these designers had a hard time, they ultimately influenced and changed the fashion industry.
Flamboyant fashion spokesman, Andre Leon Talley who helped with the exhibition said. "By their very presence, when they were acknowledged, and recognized, they took that minute of fame and ran with it, like they were running for the Olympic gold medals.  I believe that when they had chances to be on a phase, they took advantage and they quietly transformed style."

In 1953, when the fashion industry was, in practice, segregated, Ann Lowe, stands as a pillar of remarkable fortitude. History records that the Lowe, proud to be the designer of Jacqueline Kennedy's wedding event gown and bridal party gowns, did not let the fact that pipe burst in her showroom a mere 10 days prior to the wedding ruin her reputation. Lowe worked overtime, providing the dresses on schedule. There are other black designers to mention such as Jon Weston, a FIT grad,  who dealt with discrimination throughout the 1960s, but emerged in the 1970s, after the Civil Liberty Motion, when mindsets towards black designers changed, and Weston opened a Seventh Avenue
studio.
Then too, there is there is the black beaded dress of Eric Gaskins who trained with the Paris Haute Couture Givenchy and Andre Walker's abstracted fashion that illustrates the vibrancy that black designers bring to the fashion industry.
FREE "Talk and Tours" for the Black Fashion Designers exhibit include Wednesday, February 22 and Wednesday, March 15 both at 10:30 am and Monday April 24 and Monday, May 8 both at 6 pm. Meet in the FIT Museum lobby.
BLACK FASHION DESIGNERS, FASHION SYMPOSIUM, (Registration required) Monday, February 6, 10 am-5 pm.. The daylong symposium, held during Black History Month, explores the emergence of black designers in the New York and global fashion industries, the unique challenge of being labeled a "black designer<" political activism, and a wide range of other themes that are touched on in the exhibition, Black Fashion Designers. 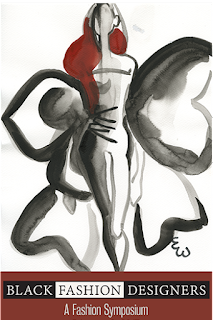 Among the twenty scholars, designers, and models scheduled to speak are Alphonso McClendon, associate professor of fashion design at Drexel University, who will talk about fashion and Jazz and Elena Romero, professor of Advertising and Marketing Communications at FIT, who will lead a conversation about hip hop's influence on the fashion industry with Harlem-based hip hop designer Dapper Dan. Also, models Veronica Webb and Bethann Hardison will discuss modeling and diversity.
For a full schedule and to register for this FREE symposium go to www.fitnyc.edu/museum, or call 2l2.217.4585. Seats are first come, first served with RSVP.
Ta Ta Darlings!!! PollyTalk will be attending the symposium. Hope to see you there, stop by and say "Hello!!!"  Fan mail always welcome at pollytalknyc@gmail.com.  Visit Polly's Blogs at www.pollytalk.com on fashion, beauty, women determined to succeed, visionary men and poetry. Just click on the link in the left-hand column to access the /Blog that resonates with your
interest.