EXHIBITS TO REMEMBER by Polly Guerin

Here's a wrap on three exhibits that have made there mark on the cultural scene in New York City.
PIERRE CHAREAU: Modern Architecture and Design through March 22 at The Jewish Museum proposes a fresh look at the internationally recognized designer and brings together rarely seen pieces of furniture, light fixtures and other major public and private collections.
Modernism in the period of Art Deco. In the 1920s and 1930s Chareau became one of the most sought-after designers in France. He circulated among Paris's cultural elite creating custom furniture and interiors that were in sync with the requirements of modern life.
Chareau's oeuvre drew on tradition while looking forward, combining the craftsmanship and materials such as mahogany with the sleek lines and metals of the machine age. However, he
is best known as the creator of the Maison de Verre, a Landmark Modernist architecture carved out of an 18-century Paris townhouse on the Left Bank. The exhibit designers Diller Scofidio + Renfro display Chareau's work in a ground breaking way.  Scenes of shadowy silhouettes of people using the furnishings are projected on screens.
VIRTUAL REALITY Best part of the show, be sure to take a seat on a swiveling chair and peer through VR glasses and get 360-degree views of select pieces in their original settings. jewishmuseumorg.
VALENTIN DE BOULOGNE: Beyond Caravaggio Monumental, breathtaking and masterful "Le Valentin," recognized as the leading French practitioner of the Caravaggio style, is currently on view at The Metropolitan Museum of Art. The response to this exhibition has been so engaging that its run has been extended but will close on Sunday, January 22, 2017.
This is the first monographic exhibition devoted to the 17th-century artist, featuring 45 of his 60-odd extant paintings that cover the walls with lifestyle views. Whether he depicts card players or a Biblical scene, Valentin imbued his painting with humanity. These everyday scenes in their monumental scale, are enticing slices of life that somehow invites the curious viewer to enter and  vicariously become part of the scene.  Valentin's oeuvre style, distinguished by dramatic contrasts between dark and light, shed emphasis on the lifelike figures painted directly from the model.  Sadly Valentin's career was short-lived by his untimely death at age 41. metmuseum.org. 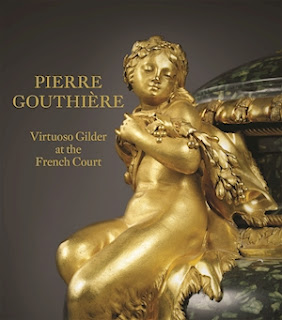 PIERRE GOUTHEIERE: Virtuoso Gilder at the French Court. The golden hand of genius, Pierre Goutheiere, was a master metalworker who may not have enjoyed the name recognition of 18th-century artists such as Fragonard, but at the height of his oeuvre his work garnered prices comparable to theirs. The Frick Collection showcases 21 of Goutheiere's finest pieces through February 19th.
His skills as a chaser-gilder earned his a royal clientele and the status of doreur du Roi to Louis XV.  Although, being a favorite of royal court gave Goutheiere an important role as master gilder,   too much of a good thing can go drastically wrong, especially when the King's mistress, Madame du Barry, failed to pay him for years of commissions which eventually drove him into bankruptcy.
This is the first exhibition devoted to his oeuvre showcasing some 21 of his finest pieces from firedogs and wall lights to mounts for Chinese porcelain vases. Not to be missed: Take time to watch a video in which one of his creations is meticulously reproduced illustrating this master gilder's step by step craftsmanship behind Goutheiere's masterworks of gilt bronze. www.frick.org.
Ta Ta Darlings!!!  AS the chill of winter drives us indoors why not visit these exhibits in warm environments to brighten your cultural interests.  Fan mail welcome at pollytalknyc@gmail.com.
Visit Polly's Blogs at www.pollytalk.com on fashion, visionary men, women determined to succeed and poetry.