BLACK HISTORY MONTH, which ends February 28th, reminds us to renew acquaintances with the tormented and talented, but short-lived life of Brooklyn-born artist JEAN-MICHAEL BASQUIAT. (1960-1988). Known for his raw gestural style of painting with graffiti-like images and scrawled text, once said. "I am not a black artist. I am an artist!"
The exhibition ONE BASQUIAT at the Brooklyn Museum last year, was the latest link between the artist, JEAN MICHAEL BASQUIAT, and Brooklyn--- from his birth at Brooklyn Hospital to childhood visits to the Brooklyn Museum, where his mother enrolled him as a Junior Member when he was six years old.
Basquiat's mother was an American of Puerto Rican descent who early on encouraged Basquiat's interest in art, taking him to new York City's great art museums. Troubled by his early childhood, when his mother was hospitalized, he dropped out of high school and left home at age 17.
BECOMING BASQUIAT With no source of backing he lived on the streets, with friends, or in abandoned buildings and began a graffiti campaign with graffiti artists Al Diaz and Shannon Dawson. They created the persona Samo(c) on walls and around Soho and the East Village and on the D. train of the New York City subway system. He began to receive notice and emerged in the above ground New York art scene at age 20. 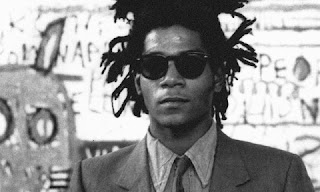 At that time a resurgence of Expressionist painting was at its zenith and he participated in his first formal exhibition in "The Times Square  Show" (1980). From there his career skyrocketed, and until his death in 1988, he was a celebrity represented in major blue-chip galleries in New York and Germany.

Yet lacking any formal training, Basquiat created highly expressionistic work that mixed graffiti and signs with the gestural and intuitive approach to Abstract Expressionist painting. Although much of his work addressed his personal angst in high stylized self-portraits, he also alluded to African American historical figures including jazz musicians, sports personalities, and writers. He appropriated and freely mixed motifs from African, Caribbean, Aztec, and Hispanic cultures and mixed "high art" references with images of popular culture, especially cartoons. 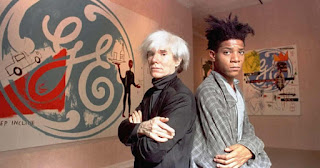 FRIENDS WITH WARHOL In 1983 the young artist was befriended by the Pop artist, Andy Warhol and they began to collaborate occasionally.  Ever on the brink of unprecedented success, Basquiat appeared on the cover of the weekly New York Times Magazine in 1983 as a representative of the contemporary art-marketing trend. Sadly,
his life was short-lived.  Three years later, at age 27, he was found dead in his loft from an overdoes of heroin. The artist and director, Julian Schnabel made Basquiat and his meteoric rise in the art world the subject of his first film. BASQUIAT (1996).
Ta Ta Darlings!!!  Sad to note that the artist, so young, so full of promise ended without
trumpet or praise.  Fan mail welcome at pollytalknyc@gmail.com. Visit Polly's Blogs on
www.pollytalk.com.