THE AGONY AND ECSTASY OF FRIDA KAHL0: Review by Polly Guerin 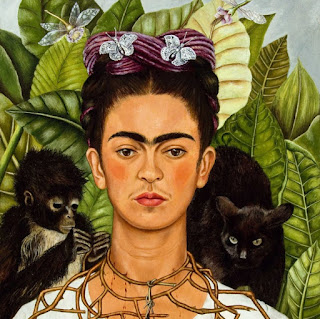 FRIDA KAHLO, the celebrated Mexican painter's life was a work of art that reveals a life full of AGONY AND ECSTASY. Like a superstar she became a pop-culture icon, a fashion guru and survivor extraordinaire. She lived in the iconic Casa Azul (Blue House) in Mexico City with her husband, the world renowned muralist Diego Riviera.
They were the power couple of the art world but the exhibit at the Brooklyn Museum, FRIDA KAHLO: APPEARANCES CAN BE DECEIVING, Through May 12, is actually a homage to a woman who continues to fascinate a legion of admirers worldwide. With a plethora of 350 objects, only eleven are paintings. The major portion of the show revolves around jewelry, decor, the native Tehuana cotumes and other traditional dresses, shawls and wraps.
We recognize Frida in dozens of self-portraits with her bold uni-brow and light mustache, the flower crown in her hair and the native costumes she preferred wearing as a symbol of her Mexican heritage. As an iconoclastic artist she painstakingly rendered striking, often shocking images that often reflect her pain and turbulent life. Frida''s journey actually began as a self-taught artist and evolved over time with kudos and international recognition.

CULTIVATING A MEXICAN IDENTITY
No matter where she traveled, whether in Paris, New York or her native country Frida fashioned herself elaborately in the Tehuana costumes of Indian maidens, creating an identity that clearly was unique and captivating. She painted using vibrant colors in a style that was influenced by indigenous cultures of Mexico. Frida Kahlo (born Magdalena Carmen Frida Kahlo y Calderon, July 6, 1907-July 13, 1954) was one of four daughters born to a Hungarian-Jewish father and a mother of Spanish and Mexican Indian descent, in the Mexico City, suburb of Coyoacan. She was born amidst political chaos in her homeland and throughout her life Frida preferred to claim 1910 as the year of her birth which coincided with the outbreak of the Mexican Revolution (1910).
AN ACCIDENT ALTERING LIFESTYLE
Some say that Frida adopted the Tehuana form of costume to hide her polio crippled leg and body disfigurement. There may be some truth to it. A polio survivor at fifteen, Frida’s young life was additionally altered due to a tragic accident.
On the cusp of her youthful dreams, Frida had entered in the premedical program at the National Preparatory School in Mexico City, but that ended when she was gravely injured in a trolley car accident three years later when she was eighteen years old. Despite spending a year in bed and enduring more than 30 operations recovering from fractures of her back, collarbone, ribs and a shattered pelvis, shoulder and neck injuries. The injuries left her broken as a youth and debilitated throughout much of her adult life. She suffered a life of constant pain and often had to wear a body brace to support her weakened condition.
BECOMING FRIDA KAHLO, THE PAINTER
One wonders what Frida could do to while away the dreary hours of recovery. It was during this year of convalescence that Frida began to paint with oils. Her paintings were mostly still life studies  and self portraits filled with the bright colors of Mexico’s native folk art. Her talent evolved dramatically with self-expression and her profound reactions to life that she produced in surrealistic style in her paintings. About a third of her body of work, about 55 paintings, consists of self portraits. In some she stares out passively, in others Frida’s oeuvre was fantastic and sometimes gory depictions that symbolically articulated her own pain. Revealing different states of her mind are portrayals revealing her heartbreak, abortion and miscarriage. Yet there was a feeling of realism in many of her works which she rendered with real images in the most honest, straightforward way.
DISCOVERING DIEGO
One day, high up on a scaffold, the celebrated muralist Diego Rivera sat contentedly on his perch doing what he loved doing, painting grand public murals with political themes. Frida encountered the larger than life Diego in such a serendipitous manner, but she had already set her eye on the mural giant when she first met Diego as a schoolgirl.
At 21, Frida fell in love with Rivera, whose approach to art and politics mirrored her own. Although he was 20 years her senior, they were married in 1929 and she became his third wife, and from the onset they became intertwined in a tumultuous marriage. Although as a couple, they remained childless one can observe Frida’s anguish of miscarriage in her paintings. During most of their life together Frida was often immobilized in a cast in her bed, or confined to a hospital room awaiting an operation or recovering from a surgery. Her torment was abetted by Diego’s incorrigible philandering, once with Frida’s own younger sister, Cristina. Yet, Frida remained loyal often referring to him as her "Baby. "
FRIDA’S DEVOTION TO RIVERA
Frida took great pride in keeping a home for Diego and loved fussing over him, cooking for him and even bathing him. Their love proved sustainable. The couple traveled to the United States and France, where Frida met luminaries from the worlds of art and politics, and had her first solo exhibition at the Julien Levy Gallery in New York City in 1938.
Though they divorced in 1939 the couple remained inseparable and remarried in 1940. Frida’s painting “The Two Fridas,” a double self-portrait, painted in 1939 at the time of her divorce from Diego, is believed to be an expression of Frida’s feelings at the time.
FRIDA EMBRACES LIFE
She delighted in children and had many exotic pets including the mischievous spider monkey that appears in “Self-Portrait with Monkey.” She loved visitors and often begged friends and “lovers to visit, not to “forget” her. Sadly after a lifetime of great fortitude and constant pain Frida Kahlo died at the age of 47.
The legendary artist has of late been transformed into a veritable cult figure with numerous books and films depicting her life. At one time there was even a cult of young women who would affect the Frida Kahlo look, simulating Tehuana costumes, the flowered headdresses and long skirts of the artist. In a lovely tribute to Frida Kahlo this exhibit at the Brooklyn Museum pays
due homage to a remarkable woman,
Ta Ta Darlings!!!  As for inspiration, Frieda Kahlo never disappoints and reminds us of
her incredible courage all her short life to create works of art with amazing messages that
reflect a lifetime of genius..  Fan mail welcome at pollytalknyc@mail.com.
Posted by Polly Guerin at 12:27 PM