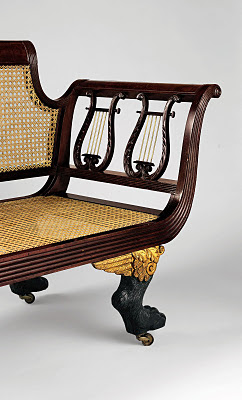 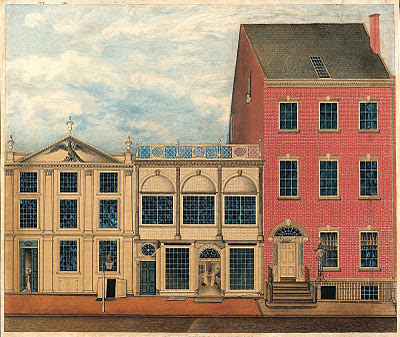 An eclectic mix of art and design, gallery openings and the American Antiques show all settle down in the Big Apple this week. It’s the Best of New York my friends, the very Best of Cultural Diversity to bring you indoors and warm up the chill of January. Here’s the scoop!!!
DUNCAN PHYFE Master Cabinetmaker in New York Renowned in his lifetime for his elegant design and superior craftsmanship, Duncan Phyfe remains America’s most famous cabinetmaker and the collection at The Metropolitan Museum of Art is a rich and storied tribute to his oeuvre. Born “Duncan Fife” in northern Scotland he immigrated to New York in the early 1780s where he apprenticed to the cabinetmaking trade. The earliest mention of his presence at 2 Broad Street (image above) occurs in 1792, when he was elected to the General Society of Mechanics and Tradesmen. In keeping up with societal preference in 1794 he changed the spelling of his name from “Fife” to Phyfe,” which suggested a more elegant, classical derivation. On view in the galleries are stunning examples of furniture, documented and firmly attributed and produced in the Phyfe workshop from Grecian style to English Regency designs and American Empire. Through May 6, 2012. http://www.metmuseum.org/.
THE WORLD OF DUNCAN PHYFE – The Arts of New York 1800-1847 at the Hirschl and Adler Galleries in New York City opens a multi-media exhibition developed as a complement to the metropolitan Museum of Art’s winter exhibit Phyfe as Master Cabinetmaker. The exhibit is comprised of work made by Phyfe and his contemporaries in New York City. This exhibit will succeed in expanding your understanding of Phyfe’s contribution to the world of 19th century fine furniture and decorative arts. Free and open to the public from Tuesday through Friday from 9:30 am to 5:30 pm, and on Saturdays from 9:30 am to 5 pm, and by appointment on Mondays. This show is a rare opportunity to purchase works of museum-quality to enhance one’s personal and work space with grace, beauty and distinction. Exhibition Though Feb. 17, 21 East 70 St. 212.535.8810.
THE METRO SHOW’s royal roster in the Collector’s Circle includes Mario Buatta, Ellie Cullman, Timothy Van Dam and Bunny Williams to name a few. The show introduces a strong list of prominent dealers at the Metropolitan Pavilion, 125 West 18th Street in Chelsea in a four-day showcase of art and antiques opening on January 19 to Sunday January 22. The Metro Show has expanded its range of offerings to include mid-20th-century design, ethnographic material, applied and decorative arts, photography, and modern paintings. The by invitation only preview is held on opening night January 18th from 6 to 7pm. The Public preview begins at 7pm with tickets are available at the door at $75. The show opens to the public Thursday, January 20 and general admission is $15 per person. For more info visit http://www.metroshowny.com/.
WINTER ANTIQUES SHOW Celebrates its 58th Year as America’s most prestigious antiques show with Six New Exhibitions and a Loan exhibition from the Historic Hudson Valley. This extraordinary venue provides museums, collectors, dealers, design professionals and first time buyers with opportunities to see and purchase exceptional pieces showcased by 73 exhibitors. This year, specialists in 18th and 19th century folk art paintings, 17th century through 19th Century American furniture, early American arms and armor, 20th century furniture and decorative objects, 20th century fine art photography, 20th Century American fine art, and tribal art join the Show in a wealth of venues to warm your collecting taste for all things beautiful and historic. The opening night party to benefit East Side House Settlement in the South Bronx is on Thursday, January 19th from 5:00 pm to 9:00 pm. For Tickets call 718.292.7392. The show from January 20-29 is held at the Park Avenue Armory, 67th St. & Park Ave., New York City. Daily admission tickets $20 can be purchased on line at http://www.winterantiquesshow.com/.
Ta Ta darlings!!! I’m making a dual pilgrimage to Duncan Phyfe and revel in the great works of the master cabinetmaker. Fan mail always welcome: pollytalk@verizon.net. Visit Polly’s Blogs at www.pollytalk.com, just click in the right-hand column to any of the links that interest you.
Posted by Polly Guerin at 12:39 PM