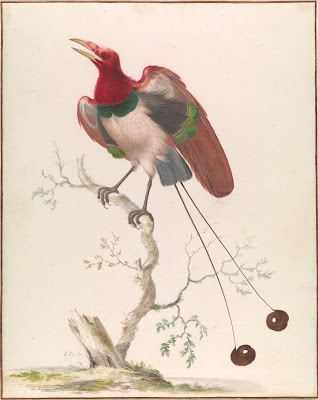 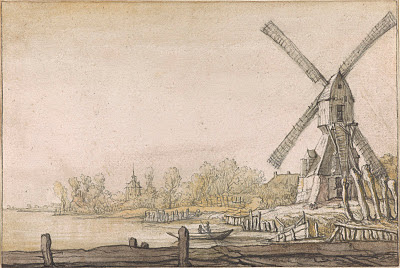 Where else in the world could you find such rare treasures as the Old Masters, Rembrandt among them, indulge your cultural senses at the Winter Antiques Show, revisit the view rare costume illustrations by celebrated artists of the Art Deco era? Only in New York my friends, it’s the very Best of the Art World right here in New York City. Here’s the scoop!!!
REMBRANDT’S WORLD: Dutch Paintings from the Clement C. Moore collection at the Morgan Library & Museum, presenting over ninety drawings by some of the preeminent artists from the seventeenth century, is a testament to the concentration of talent in the Dutch Republic during the Golden Age. Although the period is associated with Rembrandt, there were many other extraordinary artists working at the time including van Rijn and his followers Ferdinand Bol, Abraham Bloemaert; and Jan van Goyen to name a few. Image: A Bird of Paradise by Johannes Bronckhorst (1648-1727) who had ample opportunity to study the exotic taxidemied birds imported into the port city of Hoorn. Other works include portraiture, marine views, landscapes, biblical and mythological narratives, genre scenes, and the natural world fueled their creative imaginations and will encourage you to take a magnifying glass to view this rare collection. Image: Aelbert Cuyp (1620-1691), Windmill by River, with a jetty in the foreground ca. 1640. Exhibit extends through April 29th. http://www.themorgan.org/.
YOUNG COLLECTORS NIGHT at the 58th annual Winter Antiques Show on Thursday January 26 is an exciting high energy evening for new collectors, art and design enthusiasts and emerging philanthropists. This year’s event includes an exclusive “Meet the Designers” reception with New York’s most illustrious interior designers, and Wendy Goodman, Design Editor of New York Magazine. A wealth of treasures on view include specialists in 18th and 19th century folk art paintings, 17th through 19th century American furniture, early American arms and armor, 20th century furniture and decorative objects, 20th century fine art and tribal art. The 2012 loan exhibition, Celebrating Historic Hudson Valley at 60: Rockefeller Patronage in Sleepy Hallow Country, marks the 60th anniversary of John D. Rockefeller Jr.’s founding of Sleepy Hallow Restoration, now historic Hudson Valley. At the Park Avenue Armory, 67th Street and Park Avenue, through January 29, 12:00 to 8:00 daily, except Sundays and Thursday, 12:00 to 6:00 pm. General admission $20. Young Designers tickets may be purchased online at www.winterantiquesshow.com.
COSTUME DESIGN: FANTASY INTO FASHION at LEONARD FOX RARE BOOKS is on view February 2-29 with a special ‘open to the public’ reception on February 2nd, from 6-9 pm. Early in the 20th century fashion periodicals reported on dance and theater, performers were known for their influence on contemporary dress, and original costumes designs offer insight into the creative process and the interconnectivity between the artistic fantasy of the stage and the dynamic commercial world of fashion. These rarely exhibited original works exemplify the rich creative exchange, international character and diversity of theatrical design documented by some of the most significant fashion illustrators of the Art Deco period including works by George Barbier, George Valmier, Charles Martin and Umberto Brunelleschi. At Leonard Fox Ltd., 790 Madison Ave. Suite 505. http://www.foxrarebooks.com/. T 212.879-7077.
THE ZIEGFELD SOCIETY/A WINTER MUSICAL BRUNCH is just the ticket to a Saturday afternoon’s entertainment of old world favorites, remembrances of the best of Ziegfeld’s songs on Saturday, January 28 from 1-4 pm at Café Loup, 105 West 13th St, just west of 6th Ave. Discard winter’s chill and plan for a delightful afternoon. Paid reservations are highly suggested. $30 members and $35 non-members. Pay online at http://www.theziegfeldsociety.com/.
Ta Ta darlings!!! I’ll see you at the Ziegfeld Brunch and I might sing a song or two myself. Send Fan mail, always welcome at pollytalk@verizon.net. To visit Polly’s Blogs just click on the link in the right hand column on http://www.pollytalk.com/.
Posted by Polly Guerin at 8:54 AM