With the popularity of personal shorthand text messages and tweets with as many abbreviations that the human mind can think up, could the Interrobang punctuation have a new place in today’s culture? 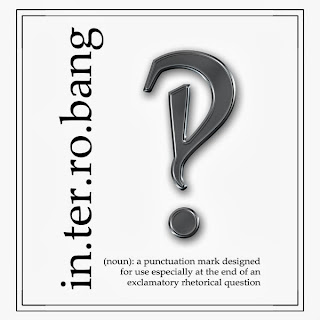 Also known as the quesclamation mark, it sometimes appeared as ?!” A stylish fusion of a question mark superimposed on an exclamation point the mark was used at the end of a rhetorical question for use in sentences like, “You did that?!” At first Interrobang was not available in type and the combined symbols were hand drawn by lettering artists. However, the Interrobang deserves its due recognition as it is the only punctuation mark invented by an American and was also featured in Americana (font). To this end we owe a note of gratitude to Martin Speckter, one of the original “Mad” men in advertising’s hall of fame.

INTERROBANG'S ORIGIN It was introduced in 1962 by Martin Speckter, president of the New York advertising and public relations agency, Martin K. Speckter Associates, Inc. In addition to running the agency with his wife, Penny Speckter. Martin was editor of the magazine, Type Talks, a trade publication put out by The Advertising Typographers Association of America. Speckter invited readers of the magazine to coin a name for the new mark and of all the names submitted Interrobang was chosen. It is a blend of interrogation and bang, an old printer's term for the exclamation mark. It is significant to note that Interrobang is the only punctuation invented in the 20th century. The mark was eventually made available on some typewriters and recognized by several dictionaries. Interrobang continued to be popular much of the 1960s during the time that the television series “Mad Men” is set. 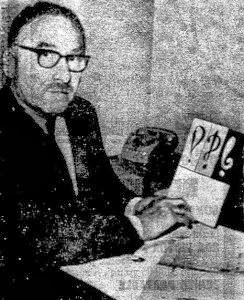 INTERPRETING INTERROBANG The mark is said to be the typographical equivalent of a grimace or a shrug of the shoulders. For example, the Interrobang could be used in expressions like this “You call that a hat ?!” Most significantly from a business point of view Speckter believed that advertising copywriters needed a new mark to punctuate exclamatory rhetorical questions common in advertising headlines. For example: “What ?! Whiter than White?!” In Allan Haley’s feature “The Interrobang is Back?! he wrote: “In this type of copy, neither an exclamation point nor a question mark (used alone) could fully convey the writer’s intent. Speckter’s solution was to combine the two into a single symbol.”

Penny Speckter, Martin’s widow keeps the Interrobang flame still burning brightly in her memories about the mark’s creator and his passion for typography. Well into her 90s, Penny still fulfills her role as the quintessential “Mad Woman.” Today she is editor of GSMT NEWS, the newsletter for The General Society of Mechanics & Tradesmen of the City of New York, whose motto is “By Hammer and Hand All Arts Do Stand. Penny also serves on the organization’s Board of Governors.