Fashion is back in town with ever fascinating venues to keep every fashionista in its mesmerizing grip. Reaching to the chic of all ages fashion designer venues and ancient textiles and costumes offer the best of New York’s ongoing romance with design. Get your first row seat on the red carpet. Only in New York my friends. Here’s the fashion scoop!!

JEAN PAUL GAULTIER: What a theatrical spectacle!!! the first international exhibition celebrating the career of the legendary French couturier Jean Paul Gaultier, who shaped the look of contemporary fashion with his avant-garde designs makes its only east coast stop on an international tour at the Brooklyn Museum. Whether showcasing men’s skirts or sending plus-size models down the runway, Jean Paul Gaultier has consistently celebrated individuality and the fun-loving aspect of fashion. The Brooklyn presentation, The Fashion World of Jean Paul Gaultier: From the Sidewalk to the Catwalk includes for the first time pieces from Gaultier’s most recent collections and stage costumes worn by Beyonce. They are among 140 haute couture and ready-to-wear ensembles and iconic costumes, such as the clothes created for Madonna’s Blond Ambition, Confessions, and MDNA tours. Accompanying the designs, many of which displayed on specially created, lifelike mannequins by Jolicoeur International are sketches, excerpts from films, concerts, and dance performances and photographs by Richard Avedon, Andy Warhol, Cindy Sherman, and others---all testifying to the daring genius of Jean Paul Gaultier. Opens October 25, 2013 to February 23, 2014, at the Brooklyn Museum of Art. Brooklynmuseum.org IMAGE: Jean Paul Gaultier's Barbes women's readytowear collection l984-85, by Paolo Roversi.

AN AMERICAN STYLE: Global Sources for New York Textile and Fashion Design Thoughout history ancient and ethnic costumes have always inspired fashion designers. However, when the creative direction from Europe was disrupted by World War I, as it would also do so with World War II, a movement began, at first limited in scope. Beginning in 1915, New York’s American Museum of Natural History (AMNH) embarked upon a mission to inspire and energize the American design industry by giving textile designers and manufacturers unprecedented access to the museum’s ethnographic collections. Drawing upon the imperialistic notion that Euro-American culture could lay special claim to indigenous artifacts from the Americas, AMNH anthropology curators sought to innovate a distinctly “American” design idiom. The exhibition is eye-popping attraction at the Bard Graduate Center Gallery 18 East 86th Street, through February 2, 2014.  www.bard.edu

DANDYISM The topic of a the new book, “I am Dandy” The Return of the Elegant Gentlemen,” focuses 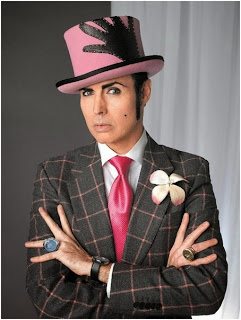 on the obsession of male preening in a compilation of photographs by photographer Rose Callahan and text, penned by Nathaniel Adams. “It takes a man of supreme confidence to be a dandy. It has to be unshakable confidence. They couldn’t live any other way,” said Callahan. “They are consumed with elegance and self-expression and have a love of dressing. that verges on obsession.” Legendary New York dandy Patrick McDonald, pictured here, defined the dandy as follows: “I wake up in the morning as a blank canvas and some days I feel modern, some days I feel surreal and I just paint myself with my clothes.” Available at major book stores and Amazon.

Ta Ta darlings!! Jean Paul Gaultier’s extravaganza is my choice this week. Fan mail welcome at . Visit Polly’s Blogs at www.pollytalk.com and in the left hand column click on the link to Blogs on fashion, remarkable men and women.