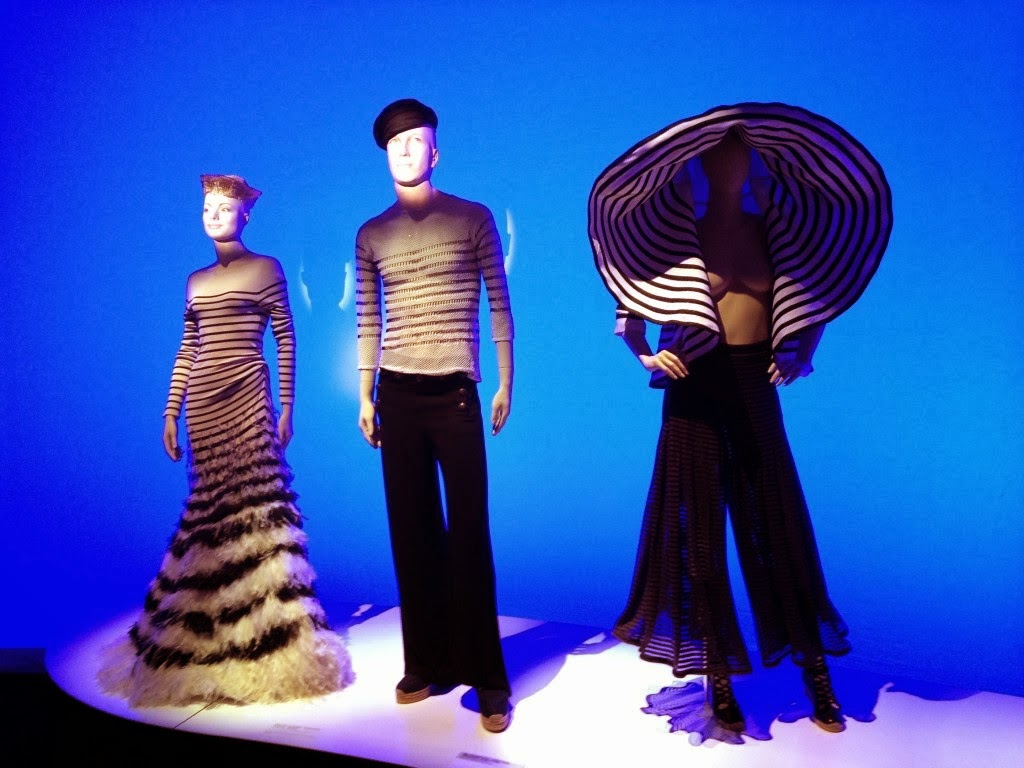 over the City in museums and showy venues elsewhere with Fashion Week taking the spotlight as well as an upcoming Museum gala. Only in New York my friends, the Best of New York. Here’s the scoop!!!

JEAN PAUL GAULTIER: The Fashion World of John Paul Gaultier: From the Sidewalks to the Catwalk: Don’t put off seeing this spectacular exhibition mounted at the Brooklyn Museum of Art, which closes on February 23. This is your final chance to see the 140 haute couture and prêt-a porter ensembles dating from the 1970s to today. Many fashions are displayed on high-tech mannequins with interactive projected faces that seemingly cast an eye in your direction and start up a conversation. The life-size figure of Jean Paul Gaultier lets you interact with the artist in an uncanny way. From sketches to film clips to stage costumes, the stunning exhibit illustrates the designer’s fondness for collaborating with fellow artists as varied as Maurice Bejart, Pedro Almodovar and Madonna. Gaultier has consistently embraced an irreverent and fun-loving aesthetic, and this exhibit pays homage to his genius.
Image: Jean Paul Gaultier's take on nauticals. The sailor, one of the high-tech mannequins, has a tendancy to flirt and talk to the visitor..

FENDI’S DRONES Fashion shows are notorious for their entertainment venues so what’s next? An unprecedented event in the fashion world. Yes, my dear fashion aficionado high-tech enters the arena. Viewers will be able to connect to fendi.com and chose the “classic view’ or the aerial shots captured by the flying “Drone Cam.” Viewers will then be able to replay the video on demand with the “Drone Cam” footage. To this end, Fendi is reaching out to hundreds of thousands of individuals who are eager to see the collection, particularly the younger customer base, but cannot be physically be at the location. Four or more drones will fly above the heads of the models to capture the red carpet fashion show. The drones are said to be small and Fendi management says, “We will increasingly get used to such technology.” Whew…what a concept!!!

FOREVER WINTOUR This just in!!! The Metropolitan Museum of Art is showing its appreciation of Anna Wintour’s staunch support of The Costume Institute by naming the space The Anna Wintour Costume Center. The center includes the Costume Institute’s exhibition galleries, library, research areas, conservation, laboratory and offices. Why such an honor you ask? Well, Wintour’s contributions to the museum have been extensive. Since 1995, the Vogue editor in chief and Conde Nast artistic director has cochaired fifteen Costume Institute benefits and for the past fourteen years, she has been a trustee of the museum. She’ a big “WOW!” Wintour has raised about $125 million over the past two decades for the Costume Institute, and played an instrumental role in the $40 million redesign and two-year renovation of the complex set to reopen to the public May 8 with the “Charles James: Beyond Fashion” exhibition. Remember you first heard about this from Pollytalk.

'DOWNTON' IN DELAWARE Fashion never seems to get tired of those sometimes doughty wardrobes of the female players in the most popular British period television costume drama ever to be produced-- not only in America but is a huge hit worldwide. Now Winterthur, the Delaware house museum that was formerly the mansion of Henry Francis du Pont, has staged a new show, “Costumes of Downton Abbey,” using clothes and accessories that have appeared on the program. Costumes featured include both upstairs and downstairs attire worn by the fictional Downton. One aim of the Winterthur exhibition, which will open March 1st, is to compare country living life in England and America during the first decades of the 20th century. It will be interesting to see the comparisons, but you’ll have to travel to Delaware.

Ta Ta Darlings!!! Pollytalk has passed up Fendi’s drones and is heading to Delaware to see Winterthur’s Downton show. Fan mail welcome at pollytalk@verizon. Visit Polly’s website pollytalk and in the left hand column click on my other Blogs on fashion, visionary men and hidden treasures in New York.