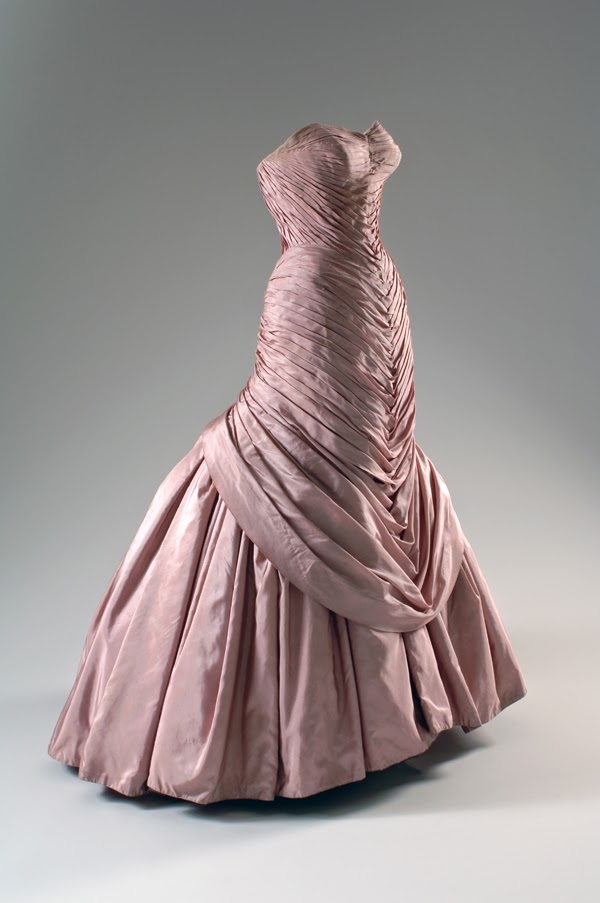 The passion of fashionistas and savvy New Yorkers heads up to May when Charles James gets his due in May and the culture vultures are out to sink their fangs into the most cultural events in the city. Don’t forget to arrive early or you won’t get in. Here’s the scoop!!!
CHARLES JAMES: Beyond Fashion is opening at the Metropolitan Museum of Art. Didn’t I tell you about this several columns ago? Well, the press and members will get the first viewing, and then it’s up to you to get in before the crowds jam the exhibit, which opens May 8th. Now the accompanying book of the same title, by the Costume Institute’s Harold Koda and Jan Glier Reeder, demonstrates just how inspiring the oeuvre of Charles James was, and just how much “beyond” clothes that influence goes. Did you know that this Anglo-American designer has roots in the privileged life he was born into in 1906 at his family’s Surrey, England, estate? Yet, a fashion designer par excellence James defied the fashion establishment and many of the looks he created, particularly the spectacular, almost architectural conceived evening gowns, are as contemporary today as when they introduced. If you want a heads up on the James phenomenon see the book’s various chapters that capsulate James’ craft of drapes and folds, spirals and wraps and architectural shaping. Ralph Rucci’s upfront prologue is a treasure in itself as are the ensuing pages gifted with colorful images. Yale University Press. The exhibition runs through August 10 and those cognoscenti will celebrate at the Costume Institute’s gala benefit on May 5 with Anna Wintour honored for raising millions for the Museum. Image: Charles James gown Metropolitan Museum of Art.
HERMES' EQUESTRIAN ROOTS Hermes USA went to Wellington, Florida during the Winter Equestrian Festival and honored its first customer --- the horse. Style met sport in a state-of-the-art stable at the Grand Prix Village, connected to the festival’s show grounds where Hermes fitted out U.S. Team riders with their uniforms, which actually made their debut at the World Equestrian Games in Normandy, France, in August. In patriotic colors, the riders wearing red 'pinque' jackets emblazoned with the American Crest and white jodhpurs, looked, tres chic!!! The fitted show coats come in jacket length red for jumping and a blue for dressage. When I visited the Hermes Museum in Paris I noted the exquisite leather saddles and the 177-year equestrian heritage that influences the Hermes design team’s scarf prints and fashionable daywear. The scope of the Museum collection goes beyond saddles and trunks into personal artifacts. Of significance, Hermes was fascinated with American innovation and licensed the zipper to pioneer it in Europe in the 1920s. Only the fashion cognoscenti seem to be able to get an invitation to the Museum, but I had that privilege when I was a professor at the Fashion Institute of Technology. It is one of the best kept secrets in Paris.
STRADIVARI VIOLA, Finest in Existence. Just a bit of cultural history. Stradivari’s name has become synonymous with perfection in the field of musical instruments, and only ten survive. Sotheby’s and Ingles and Hayday are offering for sale the finest viola in existence. A Stradivari viola is the ultimate prize for collections and the “Macdonald’ of 1719 is one of only two violas made during Stradivari’s Golden Period’ (1700-1720). The ‘Macdonald’ viola was purchased by Peter Schidlof of the Amadeus Quartet in 1964 and is being offered for sale by the family of the late musician, who died in 1987. The curator commented, “The Stradivari is a living instrument and should be played at regular intervals, it would be a pity if a collector obtained it merely to showcase it behind a glass display case.” Get out your check book!!! Ha!!! The viola will be offered through a sealed bid process, with bids expected in excess of US$45 million.
GRAND CENTRAL QUILTING: The New York Transit Museum’s exhibition at Grand Central Terminal represents the work of quilt artists representing 15 states. It is a craft person’s dream and a visitor’s privilege to see these amazing quilts. The City Quilter designed four fabrics to commemorate Grand Central Terminal’s Centennial in 2013 and recruited Meredith Corporation’s American Patchwork & Quilting, the largest circulation magazine serving the quilting audience, to sponsor a national quilt-making “challenge,” a competition to make commemorative quilts that use the City Quilter Grand Central fabrics that exemplified what Grand Central theme. The quilts exemplify the artistic diversity of quilt art and among the fascinating quilts the first prize winner is Ligaya Siachongco, New York, NY, Quilt name: Grand Central Terminal Mandala. You know where to go, so be there!!! The exhibition will be in Grand Central through July 6. I wrote about The City Quilter, located at 133 West 25th Street, in an earlier column.

Ta Ta Darlings!!! Pollytalk is visiting Grand Central Terminal’s Quilt exhibit, you should, too! Fan mail welcome at pollytalk@verizon. Visit Polly’s website pollytalk and in the left hand column click on my other Blogs on fashion, visionary men and hidden treasures in New York.