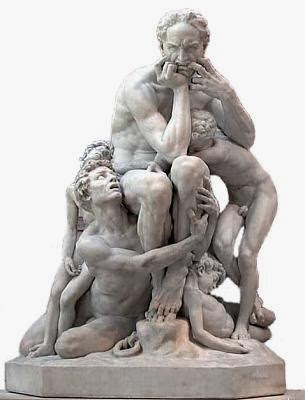 March rushes in on a high voltage literary lifestyle that brings ancient and modern culture with a profusion of venues to spring forward into warmer weather. Only in New York, my friends, the best of New York. Here’s the scoop!!!

THE PASSION OF JEAN-BAPTISTE CARPEAUX, the first retrospective of the 19th-century sculptor and painter’s brief but illustrious career opens March 10th at The Metropolitan Museum of Art and extends to May 26. The exhibition explores the life and work of the exceptionally gifted, deeply tormented sculptor who define the heady atmosphere of the Second Empire in France (1852-1871). This first full-scale exhibition devoted to Carpeaux (1827-1875) features about 160 works including sculptures, paintings, and drawings, which will be organized around the major projects that the artist undertook during his brief and stormy career. Carpeaux is best known today for a single masterpiece, Ugolino and His Sons and Prince Imperial with his Dog Nero IMAGE; UGOLINO and HIS SONS, Metropolitan Museum of Art.  Carpeaux was a multifaceted and prolific artist who imbued his work with strong movement and visceral drive. He strove for anatomical realism in all media, but especially in his marble sculptures and busts, which seem to capture flesh and blood in stone. His dramatic, highly independent paintings, barely known. during his lifetime, will also be on display Carpeaux, who was plagued with violent mood swings throughout his life, was only 48 when he died. Despite this, he was extraordinarily productive, accomplishing a vast body of work. Met Museum will hold two events in conjunction with the exhibition---Sculpting Sound: The Music of Carpeaux’s Circle with Susan Graham, mezzo-soprano, on April 28 and Friends and Demons: The Life and work of Carpeaux, a presentation by curator James David Draper, on May 14.
GAUGUIN; METAMORPHOSES is the first major monographic exhibition on Paul Gauguin (French, 1848-1903) ever present at The Museum of Modern Art, and the first exhibition to focus particularly on the artist’s rare and extraordinary prints and transfer drawings and their relationship to his paintings and sculptures. Approximate 160 works are on view from March 8th through June 8th 2014 in the International Council of MoMa’s Special Exhibition Gallery. More than any other artist Gauguin inspiration from working across mediums. Though most celebrated as a pioneer of modernist painting, at various moments Gauguin was also intensely engaged with wood carving, ceramics, lithography, woodcut, monotype, and transfer drawing—all medium that ignited his creativity. Gauguin, who had no formal artistic training, led a peripatetic life, settling for extended periods in different regions of the world—including most famously, Tahiti. His search for culture unspoiled by European mores and restraints paralleled his eagerness to work with unfamiliar techniques in order to create entirely new types of artworks. This exhibition focuses on these less well-known, but arguably even more innovative aspects of Gauguin’s practice, especially the rare and extraordinary prints he created in several discrete bursts of activity from 1889 until his death in 1903. At MoMA, 11 E. 53rd Street.
JEAN-BAPTISTE BARRIERE As part of the “Composer Portraits” series of its 25th-anniversary season, Miller Theatre of Columbia University presents works by the multimedia artist and computer-music luminary Jean-Baptiste Barriere, who will take the stage himself. The program includes three world premieres and the composer’s seminal 1983 piece “Chreode,” featuring synthesized human voices. A concurrent exhibition offers a fuller perspective on Barriere’s multifaceted artistic pursuits. Date: March 29. Info: Millertheater.com
A LA FRANCAISE: Calling all Francophiles. New York City Ballet’s A La Francaise program includes the world premiere of Artistic Director Peter Martin’s second collaboration with Marc-Andre Dalbavie, a former Boulez protégé and among the most widely performed composers of his generation. Also slated: Jerome Robbin’s duet “Afternoon of a Faun,” with a score by Debussy.
Ta Ta Darlings!!! Pollytalk went to the preview of Gauguin, highly recommended, it is a real eye-opener! Fan mail welcome at pollytalk@verizon. Visit Polly’s website pollytalk.com and in the left hand column click on my other Blogs on fashion, visionary men and hidden treasures in New York.