Not a day goes by in New York’s multi-cultural venues that there is more than a dozen events to schedule on one’s agenda. It’s the best of New York and only in New York my friends where such treasures enlighten us with such diverse entertainments on Manhattan’s East Side. Here’s the scoop!!!

SOTHEBY’S INAUGURAL DESIGNER SHOWHOUSE headlines events this week at the East Side. The show opens today through March 30th and is free and open to the public, where six innovative and inspired interior designers have curated a room on the sixth floor exhibition space of Sotheby’s Manhattan headquarters, 72nd Street and York Avenue. The showhouse in partnership with Sotheby’s 1744 Young Collectors Club includes rooms by Ryan Korban,, known for his retail design including Balenciaga’s men’s and women flagship stores; McMillen Inc., the oldest full service design an decorating firm in America; Catherine Casteel and Maximilian Sinsteden, whose collective background includes working for Bunny Williams and Charlotte Moss to name a few. Each space evokes the designer’s unique aesthetic and is comprised of items from Sotheby’s upcoming spring auctions including English and Continental furniture, 20th century design, contemporary and impressionist prints, African and European sculpture, carpets, old master paintings and silver. Info: sothebys.com/desginershowhouse

GOLDEN VISION OF DENSATIL: A TIBETAN BUDDHIST MONASTERY Stroll over to Park Avenue and visit Asia Society, 725 Park Avenue (70th St.) where the physical layout of the exhibit temps your imagination; on view an actual stupa, moving from lower layers of deities to higher level deities shed light on enlightenment. The monastery, a Tibetan treasure, was pillaged centuries later during the Mao’s Cultural Revolution, and now only fragments remain with pictures of monastery artworks to fill in the gaps. The stupa is topped by a bell-shaped, domed metal reliquary and a four-armed female deity sits on top of a lotus blossom. A peek into the historical past, the monastery may inspire your noblest ideals. 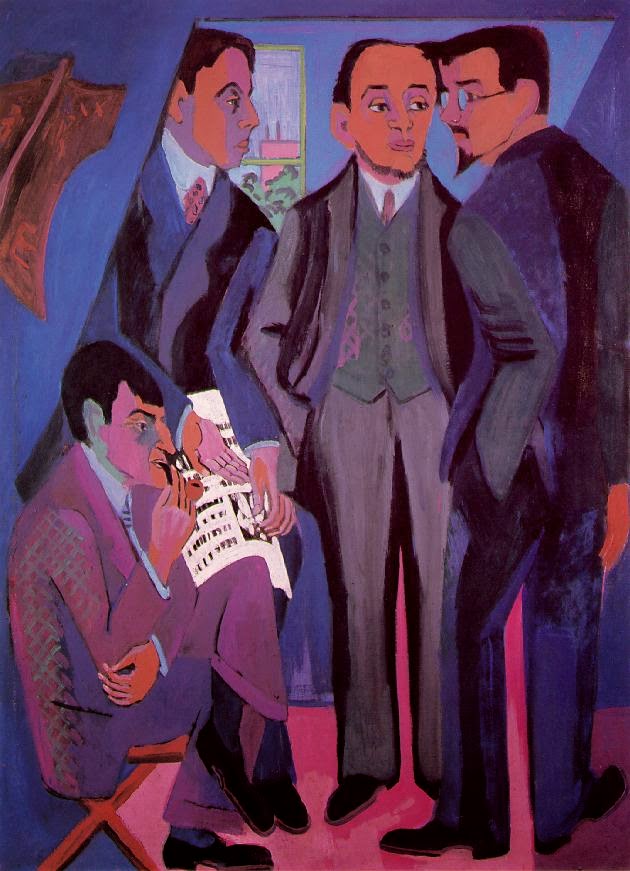 DEGENERATE ART: THE ATTACK ON MODERN ART IN NAZI GERMANY 1937 takes you to the Neue Galerie New York, at 1048 Fifth Avenue at 86th Street where the amazing exhibition focuses on the Nazis’ infamous degenerate Art exhibition of 1937. Many of the modern art works on view were seized from museums and private collection while expressionist masterpieces explore the traumatic psyche of the time. The term “degenerate” was used to describe the campaign b the National Socialist regime used in its campaign against modern art. Through June 30. Info: neuegalerie.org
Image: A group of Artists (The painters of the Brucke) by Ernst Ludwig Kirchner, 1925-26 oil on canvas, Museum Cologne, Germany.
POLLYTALKS ABOUT FASHION Now that the curtain has come down on the fashion shows in New York, London, Milan and Paris I have not recovered from the exhausting blur of garments and wonder what’s the point, where’s the trend, where’s the statement, who are those fierce-looking mannequins? I remember when I could come back from Europe and have a definite trend in mind, but as for today it’s a Hodge Podge of costume-looks, a soupcon of fabrics and gimmicky effects. The staging is entertaining, the venues amazing, but what about the clothes, if one looks at themuarely in the face, there’s not much to say, except “Really!!!” Quite frankly, today there’s no distinct message but one thing comes to mind. I think it is the consumer, women at large who set their own trends. Quite frankly I like the fact that women are taking charge and creating their own ‘look’ with what they already have in their wardrobe and tweaking it with accessories. So go for it ladies, create your own style, forget about the fashion machine it’s steering you wrong this time.

Ta Ta Darlings!!! Pollytalk’s going to the Sotheby’s Designer Showhouse today, you should too! Fan mail welcome at pollytalk@verizon. Visit Polly’s website pollytalk and in the left hand column click on my other Blogs on fashion, visionary men and hidden treasures in New York.